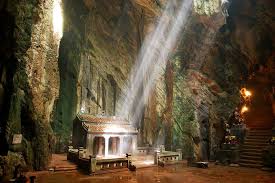 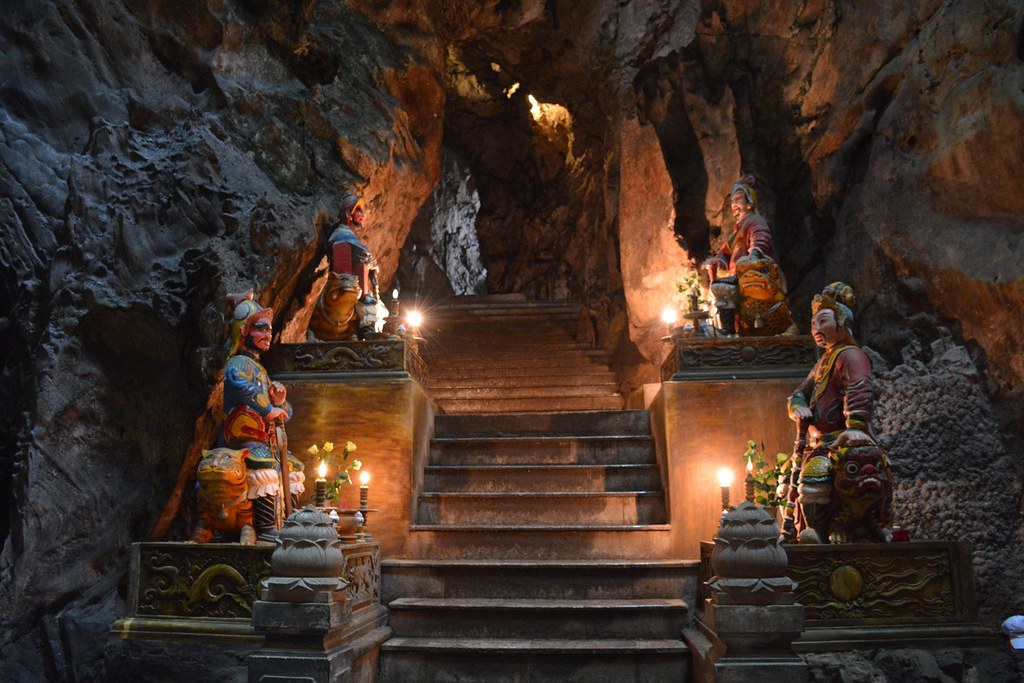 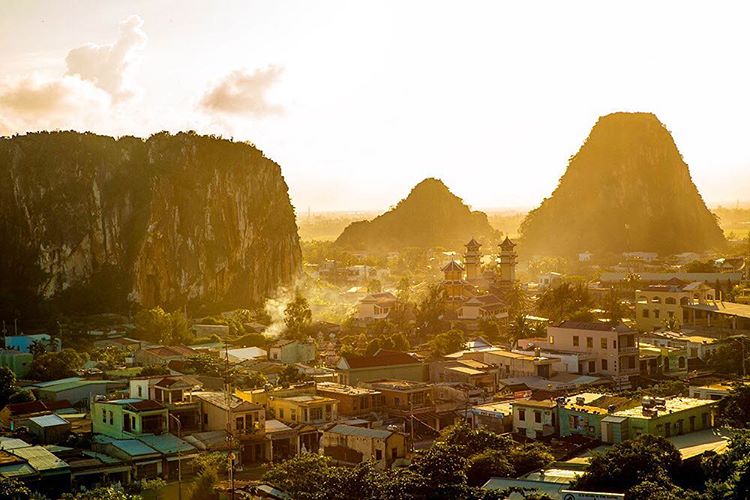 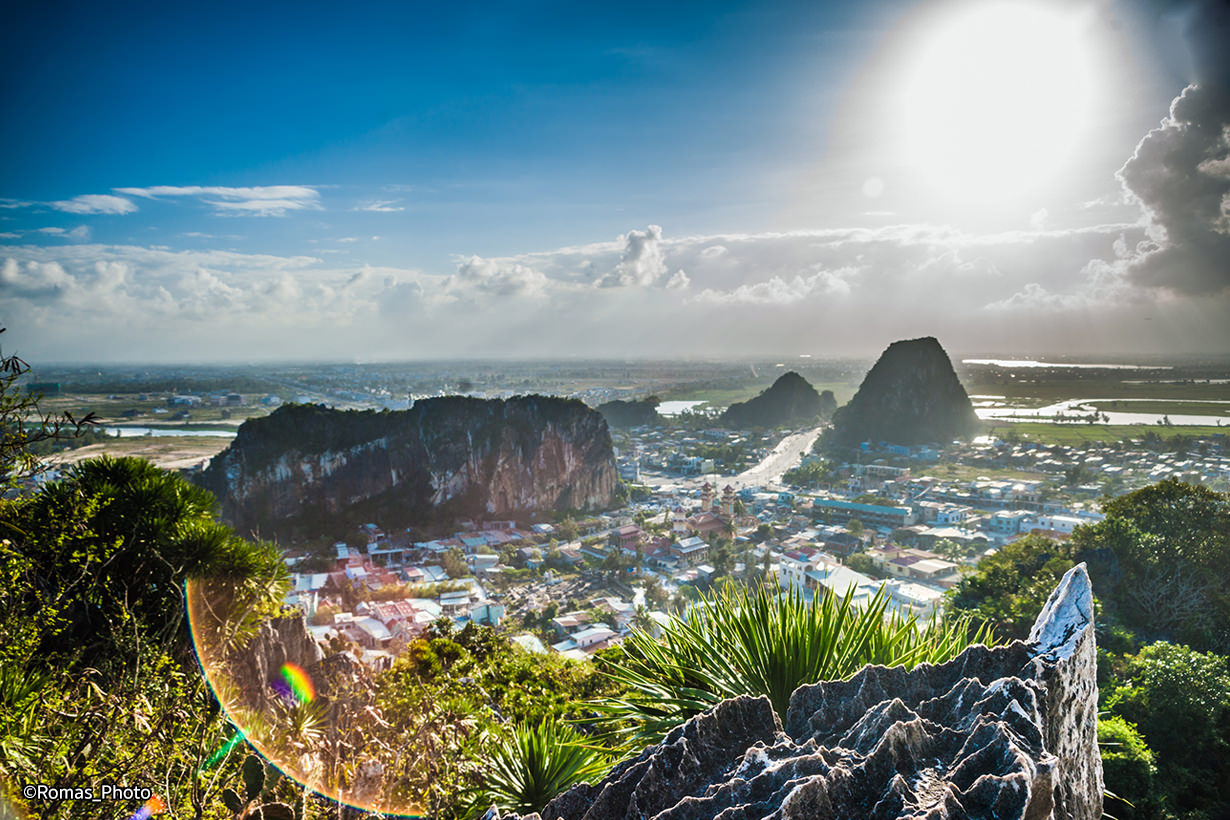 The Marble Mountains are a cluster of five hills made from limestone and marble in Da Nang. It's also a well-known pilgrimage site with peaks, caves, tunnels and temples all just waiting to be discovered. Named after the elements metal, wood, water, fire and earth, Marble Mountains exist in a coastal area that is renowned for stone-cutting and sculpture about 9km south of Da Nang.

The caves within the mountains hold many secrets including bullet holes from when troops used to spy on the US soldiers relaxing on My Khe Beach below and buildings standing within the caves and grottoes. There are also Buddhist sanctuaries and places of worship dotted across the mountains which are a much-visited spiritual site. You can even see a special circular cave here. It leads to the summit, where you can enjoy spectacular panoramic views.

According to ancient folklore, a dragon emerged from the water on Non Nuoc Beach and laid an egg. A thousand days and a thousand nights followed before the egg hatched, and out stepped a beautiful girl. The fragments of the shell were left on the beach and eventually grew into the five mystical Marble Mountains.

Today, one of the most popular highlights is climbing up the Marble Mountains and enjoying spectacular views across Non Nuoc, also known as My Khe Beach. The Mountain of Water which is home to pagodas dating back to the 17th century and a number of caves is one the most frequented climbs with a steep hike up stone steps to Tam Quan Gate and its superb vistas to Mount Kim Son or Metal Mountain and the coastline from the Riverview Tower located next to the gate.

The Riverview Tower dates back to the 18th century and the reign of the Emperor Minh Mang. Close by is Van Nguyet Grotto which is a nice resting spot where you can grab a fresh coconut to drink. The Lantern Cave is also worth a look, small but deep and filled with lava along with Am Phu Cave which heads down to a very scenic viewpoint.

You should allow up to four hours to explore all of Marble Mountains so its good to start early when it is not so hot and of course wear comfortable shoes, and if you can, bring a torch. Vietnamese children sell souvenirs at Marble Mountains and you can expect to be hassled until you've either bought a gift or 'tipped' them a few dollars for a 'guided tour'.

These mountains have a complicated system of caves and tunnels. In the past they were used as hiding places and important bases for the Vietnam revolutionaries.

Among the five, Thuy Son, the mountain of water, is the highest one and also the main attraction. Almost all tourists come to Marble Mountains to climb Thuy Son. This mountain has many caves and Buddhist temples, many dating back to the 17th century.

Climbing up about 150 stone steps from the foot of Thuy Son, one will reach the most beautiful observatory spot: the Riverview Tower or Vong Giang Tower in Vietnamese. The tower was built in the 18th century by Emperor Minh Mang, offering a breathtaking view to Kim Son or the mountain of metal, Truong Giang and Cam Le rivers and beautiful coastal ahead.

Tourists may also want to visit the Non Nuoc Village at the foot of Marble Mountains. The village is famous for stone sculptures and handicrafts. Here you can buy many things made of marble stone, from small one like earrings, necklaces, vases to the huge sculptures of Buddha. In the past, rock was extracted directly from the Marble Mountains to make sculptures but now the direct extraction was made illegal. Materials for sculpturing work are now transported from nearby provinces like Quang Nam and Thanh Hoa.

How to get there

From Da Nang city center, tourists have a plenty of choices to get to Marble Mountains. Either book a tour or take a taxi, or even a motorbike-taxi, you can reach your destination in a few minutes. From Hoi An, drive north 20 km you will see a big sign saying the Marble mountain.