Rooster Church or the Sacred Heart of Jesus Church 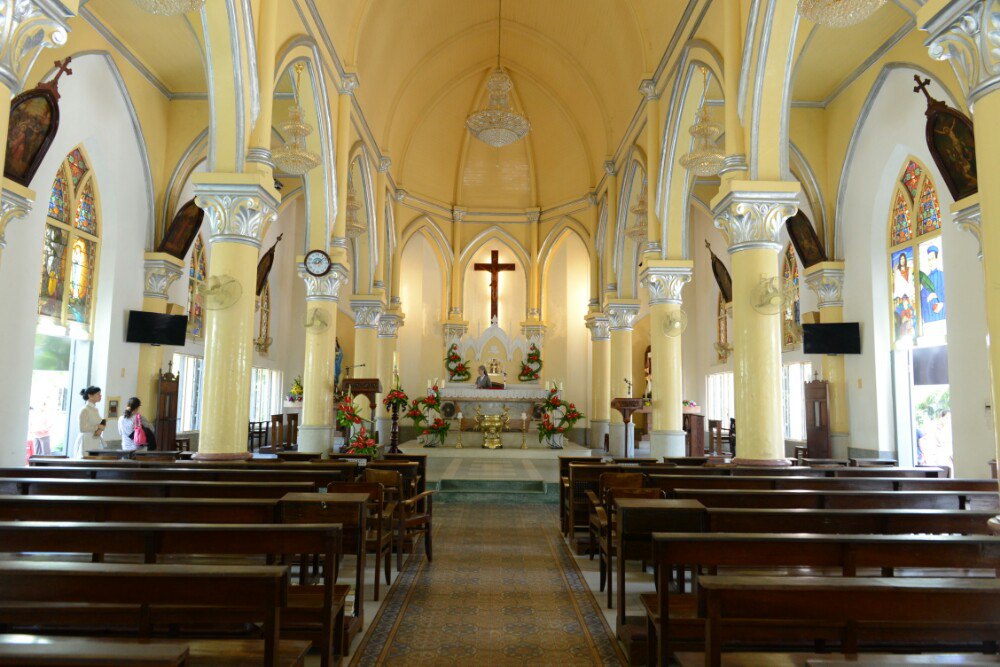 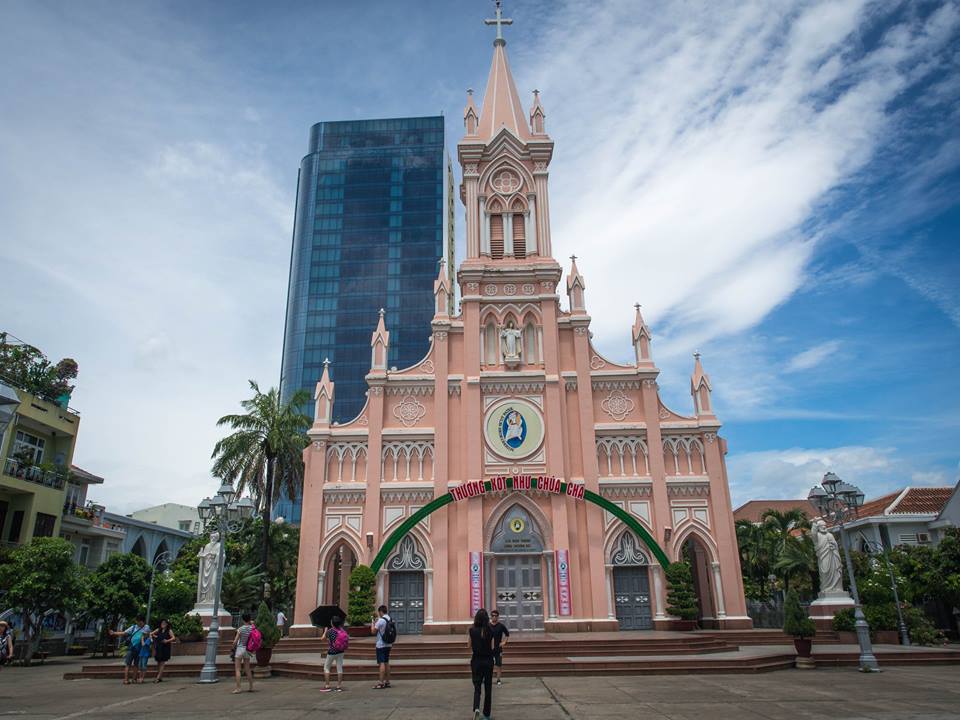 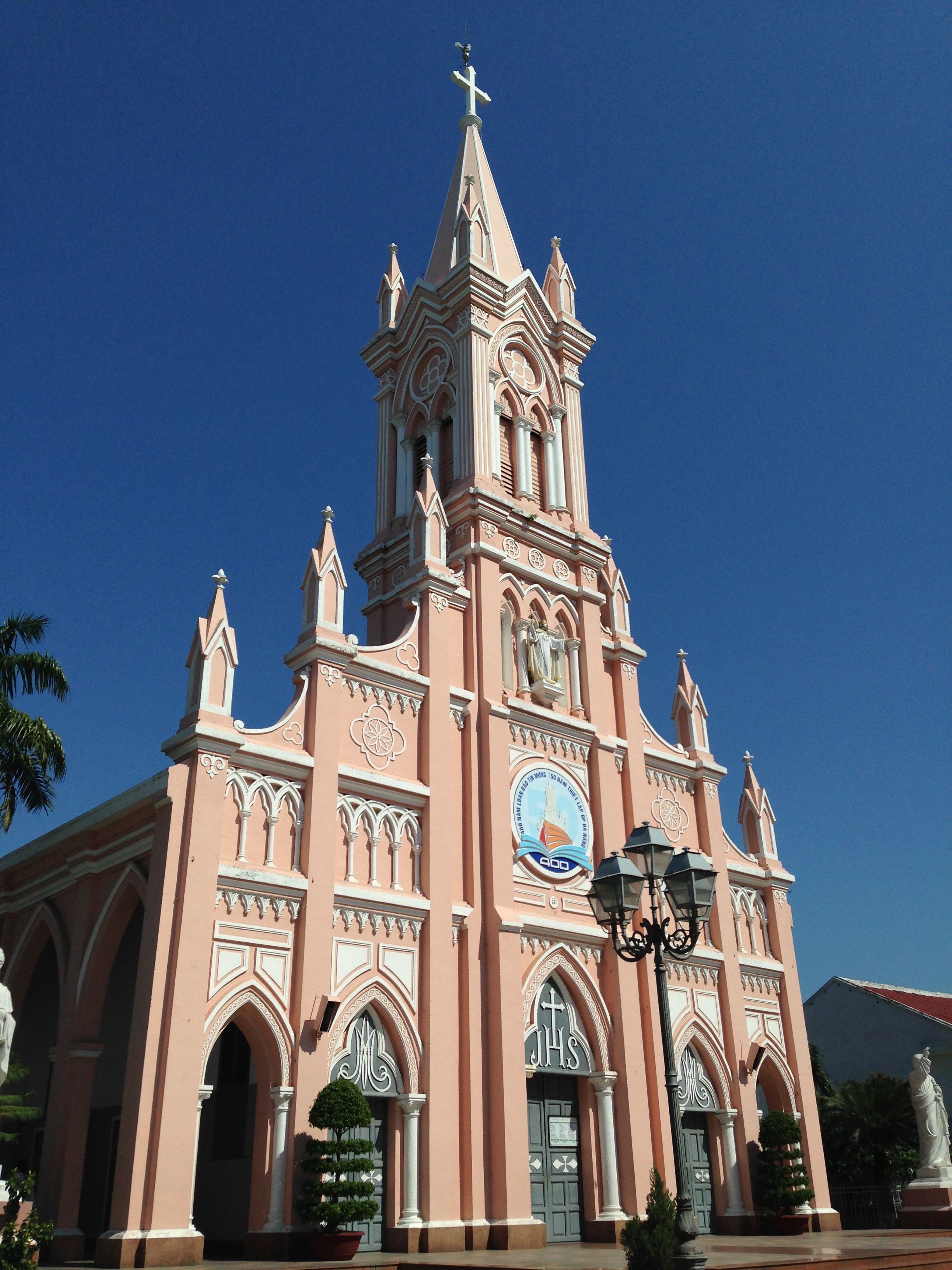 Da Nang Cathedral is also known as Rooster Church or the Sacred Heart of Jesus Church. The Cathedral is located on bustling Tran Phu Street, Da Nang city, which is extremely convenient for all tourists visiting. Built in 1923, Rooster Church Da Nang is the only church in Da Nang constructed under French colonialism, yet it has retained almost intact ancient features and its unique architecture so far. It is worth an attraction in Da Nang for tourists who prefer to explore these impressive architecture. Discovering the Cathedral is one of things to do in Da Nang in the journey of exploring the beautiful coastal city.

Da Nang Cathedral is also called as Tourane Church (French occupation of Vietnam). However, the locals often nickname the church as Rooster Church thanks to the symbol of the gray rooster on top of the church which is made of hollow light alloy and coated with a layer of special chemicals. As explained by the priest, the rooster on top of the church is not the symbol of France but the symbol associated with St. Peter's stories written in the Gospel reminding the penitence and awakening. The church has officially become Da Nang Cathedral since 1963, one of the most important religious centers of the city. With its unique architecture and significance, Da Nang Cathedral was awarded the Medal of Vatican and has become attractive tourist attractions in Da Nang.

As one of the most beautiful Da Nang churches, Rooster Church was directly designed and constructed by priest Vallet. The church was built in an extremely short time, which started from 02/1923 and inaugurated on 10/03/1924. Though built with the astonishing speed, the church is still magnificent in the eyes of every tourists once admiring. Just like other churches in Da Nang built under Gothic architecture, Da Nang Cathedral was designed with towering contours and rhombic-shaped entrance arches. Inside the Cathedral, there are the large number of pictures and statues of Jesus illustrated in the Bible, which is decorated under the form of Catholic Church art in the West. Not only is it the impressive tourist spot in Da Nang travel for Catholics, the Cathedral is also an ideal rendezvous for young couples to record their memorable moments.

Notably, the glass-mounted doors inside the church clearly display events in the Bible as well as reflect the interference on culture between Vietnam and France in particular and Western culture in general. The interior inside the Cathedral is designed relatively simple but dignified with towering dome structure, along with the simple but sophisticated motifs engraved on rows of the pillars. Tourist are actually surprised at the architectural overall when setting foot in the Cathedral. In addition, there is a grotto of Our Lady behind the church which was built in form of Lourdes grotto in France. The atmosphere looks extremely peaceful and sacred. Especially, visiting Rooster Church at weekends, tourists will be witnessed and participate in the activities and the solemn rites of Catholicism. It certainly will be one of unforgettable memories while traveling to Da Nang.

As the special religious architectural works of Da Nang coastal city, even if there is no chance to visit this destination, those who love the church buildings inspired French architectural styles can be find numerous spectacular images of Da Nang Cathedral on the popular tourist sites. Undergoing the change of time, unique architectural features of Rooster Church Da Nang has been deliberately preserved and become a red flame gently heating the pilgrim soul in the journey to the Da Nang city full of windy.

Da Nang Cathedral is an interesting attraction for tourists to contemplate, especially with foreign tourists in Da Nang tours. Here, tourists not only have an opportunity to explore the unique architecture of the Cathedral, but also immerse in the solemn and sacred atmosphere, far differing from the hustle and bustle of the urban life. Da Nang Cathedral deserves to be an appealing tourist spot of Da Nang tourism, alluring numerous both domestic and foreign tourists.